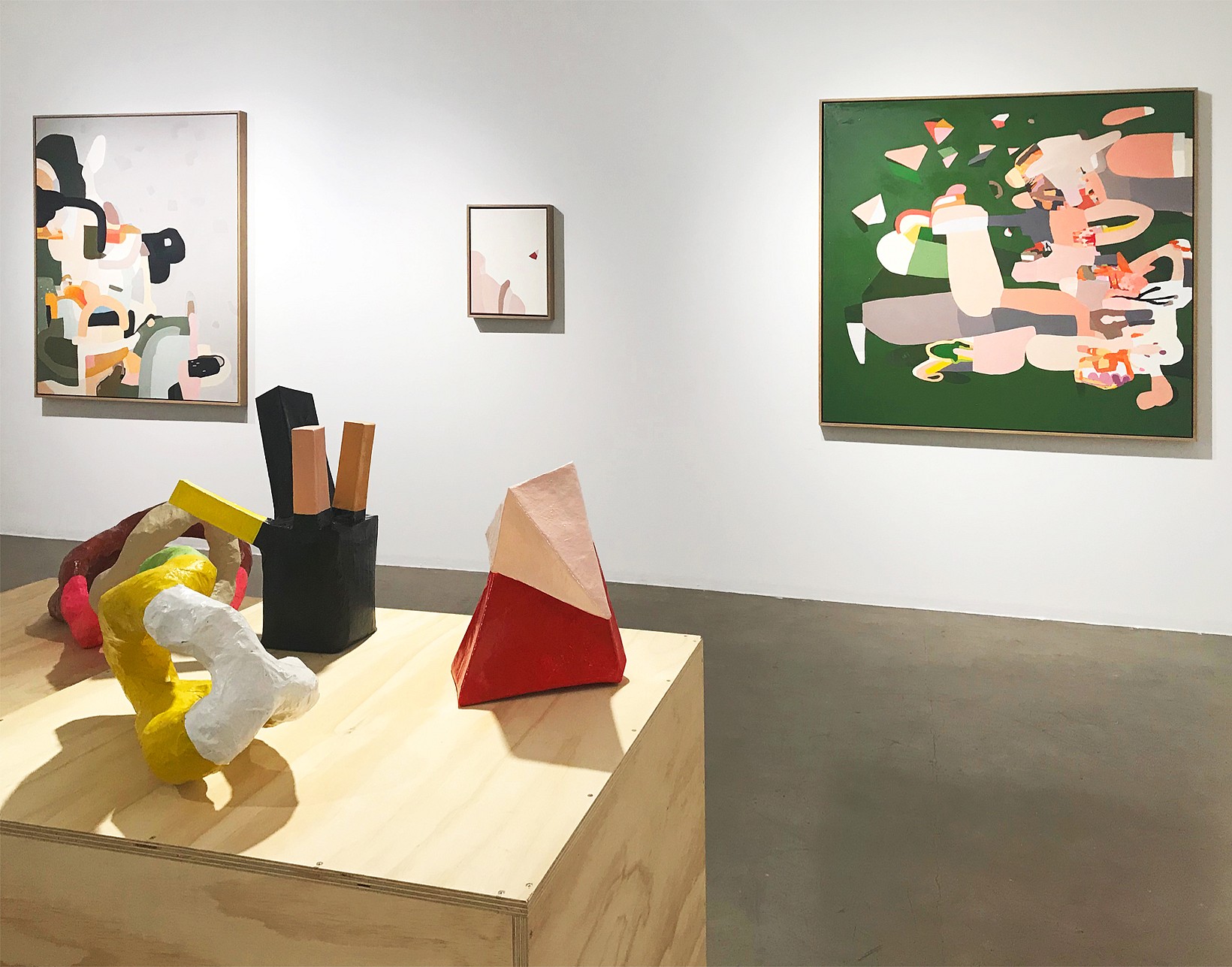 In the clear light that suffuses Jen Wink Hays’ studio, shapes and colors seem to leap from one painting to another, even solidifying into sculptures that hang in chromatic clusters from the ceiling. Brightly banded paint tubes pile over tables, nodding at the worlds Hays has made of them. This is a place where color, form, material and idea bounce between surface and space, alive and free.

Hays builds her works by painting around and over previous layers, an inverted process that requires her to both build a foundation and selectively obscure it. Her method is simultaneously akin to a sculptor laminating wood to carve into it, and a painter orchestrating color across a surface. In process, her paintings themselves move from horizontal to vertical. She starts the paintings flat on a table, painting fast and loose with often fluorescent acrylics to “set off a chain reaction of new visual stories.” Then, she stands her paintings up and works vertically, “sculpting” medium-enriched acrylic and oil paint over the foundation. Her final movement is a refining, a “closing in” on layers of color with paint that “frames” them.

In the airy space that stretches across part of a former floor of a school, Hays’ paintings and sculptures comprise an environment—their riot of red and neon yellow-green converging with subtle gradations of color in a panoramic visitation of forms. Her sculptures in papier-mâché or plaster, painted assertively like traditional lobster buoys in Maine, swell in bulbous bands of color, their corpuscular red, green, white, yellow and gray enamel forms hanging from thick skeins of jute rope.

Hays grew up in Bath, Maine, where she lived in close relationship with the natural environment and the industrial history of shipbuilding and commercial fishing that together shape the state’s rugged coastline as surely as the waves. Maine’s edges, where the ocean meets land and where the water’s surface meets ships’ hulls that rise painted and gleaming from the unseen fathoms below, configure Hays’ attunement to the visual world. “Generations of my family worked at the Bath Iron Works,” Hays explains, “the Kennebec river goes right through, and right up the river is this quaint spot with the [picturesque] lighthouse, but up the river these giant naval destroyers are  being  built and launched. [When I was a child, I] would look at how the huge ships meet the water and the scary place where the ship [shows] how deep the water is, [hinting at] what’s underneath it. […] I was always struck by that spot, that terror, where you can’t see beneath.”

Hays remembers visiting her great uncle, who was a lobsterman, in his home on a remote island off the coast of Maine as a child, and how exciting the colorful buoys were, hanging along a weathered fence. “It was the only playful color,” she remembers, “but that’s because [the buoys] had a function. Each lobsterman had his own style so he could go out and get his buoys and not someone else’s. […] I was always looking for color in a natural situation.”

Hays’ new sculptures agglomerate the vernacular of Maine buoys and her own invented forms. Balloon armatures cluster with uncanny attachments, all underlying papier-mâché and plaster she paints with bright enamel. In Cluster Form II, corpulent forms cluster in chromatic ecstasy. They could be accumulations breasts or testicles, fingers or lumps or sacs. They call upon the body’s swell like Louise Bourgeois’ Cumul I or Janus Fleuri sculptures while also looking like joyfully multiplying buoys-become-vital—like cells dividing in a new biome of buoy-creatures out beyond human purview.

The buoy, with its traditions of colorful surface, and of harvesting and trade are for Hays emblematic of the ways invented objects become naturalized over time. The normalizing of the strange—the making of the visual world into something self-evident, is precisely what Hays’ clustering, fragmenting, and partially excavated forms work to undo. As the forms hang down bag-like but weightless, mass transforms into paper, paper becomes massive. Divided in painted sections of glossy gray and glossy yellow, the work’s surfaces carry the jaunty, happy, shiny luster of the commercially-produced new, yet as they hang overhead, they submerge us in their make-believe sea, making us part of the mysterious and strange world of quarry they trap and signal.

Hays’ career stretches back to her days at Barnard College where she began painting in 1991, through an early career painting in her studio on Lafayette Street. Having founding Utility Design and co-founded the influential Blue School in New York, Hays moved to Philadelphia in 2015, where she and her husband Tyler Hays and children live in the thick stone walls of a renovated former Catholic school—its masonry silence and relative height preserving a feeling of sanctuary.

Out the studio windows, the cheerfully varied buildings of Fishtown butt against each other; in the cool light of the studio, Hays’ paintings grow and pile. Built and excavated, they are topographical. These forms mound over each other or stack in towers. At times, they grow according to an inner but alien organic logic, like fauna photosynthesizing a new sun in an unknown jungle. “I do feel sometimes like it’s a little bit of a jungle and here things grow differently,” Hays explains. “In this other world, this is how things grow. This is what nature looks like here. […] it’s a hot place where nature is going its own way. […] like a vine out of control.”

In Hays’ painting Growing Season (2019), color forms stack up and stick to each other, clumping in a prismatic mound. From the painting’s bottom edge, forms grow. Trunks sprout. Organic shapes in emerald-green, bubblegum pink, and marigold-orange congregate or even cling to each other under what could be a beige-pink sky. In the painting’s right quarter, a single tulip-shaped appendage banded in raucous shades of bright pink reaches upward—a sticky weathervane aloft in the opaque firmament. Across two and three dimensions, Hays’ forms jump from paintings to sculpture and back again, swinging cartoonlike between canny and un.

In the even light and stillness of Hays’ studio, her works heckle and rebel, displacing the ordinary, submerging and interrupting it with new depths and volumes. These paintings and sculptures borrow fathoms from the sea; they look out on the built world and the natural rubbing against each other; they pull sweaty air from an invented jungle. They pile up, the float, they fly off, they live.