"As politicians and pundits debate the virtues and vices of securing national borders, the works in Maysey Craddock’s fourth New York solo exhibition consider instead the fragility of less contrived boundaries—the wild natural shores between land and sea. Coastlines, rivers, and deltas, shaped and reshaped by the sea, by storms, and by humankind, are the abstracted subject and conceptual ballast of Craddock’s recent works. In these paintings, delicately traced tree limbs and ragged alluvial trailings overspread pieced paper surfaces stitched together with silk thread. As the national conversation on border security devolves into the simplistic rigidity epitomized by “the wall,” Craddock offers instead a view of natural borders as radically provisional and delicate—spaces alive with ceaseless adaptation and regeneration." 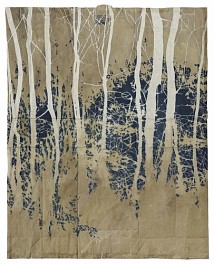 "Maysey Craddock took the title of her show, “Langsam Sea,” from a poem by Anne Michaels, which reads, in part: “In time, night after night, we’ll begin to dream of a langsam sea, waves in slow motion, thickening to sand.” A German term, often used in musical notation to direct the musicians to play slowly, “langsam” also describes the gradual but inexorable pace of change along the Gulf coastline."

"Broken branches, scrapped wood, tangled wires and knotted roots—these are the forms that speak to Memphis artist Maysey Craddock. Having spent the majority of her adolescence on the Alabama Gulf Coast and in New Orleans, Maysey developed a reverence for places where the land meets the sea. From an early age, she began documenting this type of landscape, keeping countless sketches that loosely outlined the marshy horizon. Beautiful, but also frightening and complex, these habitats appeared to Maysey to be a point of both life and destruction."